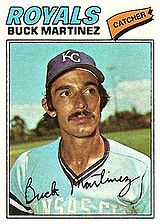 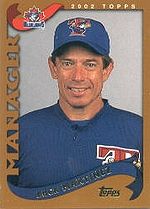 Catcher Buck Martinez played seventeen seasons in the majors for three different clubs. Following his playing days, he was a broadcaster and big league manager.

Originally signed by the Philadelphia Phillies in 1967, Martinez played two years in their chain before being taken by the Houston Astros in the 1968 Rule V Draft. He never wore their uniform, as he was traded to the Kansas City Royals just weeks later. He reached the majors in 1969 and got his only postseason experience in the 1976 ALCS, going 5-for-15 with 4 RBI as Kansas City fell to the New York Yankees in five games. He remained with the Royals through the 1977 season, after which he was dealt to the St. Louis Cardinals, who in turn sent him to the Milwaukee Brewers. He spent three years with the Brewers, splitting duties behind the plate with Charlie Moore.

Early in 1981, Martinez was traded to the Blue Jays for Gil Kubski. He played 454 games over six seasons with Toronto, sharing catching duties with Ernie Whitt. He had his best seasons in 1982 and 1983, hitting 10 home runs each season.

After his playing days, Martinez became a Blue Jays broadcaster and then spent a decade with ESPN. He became Toronto's manager in 2001 and led them to a third place finish that year. After a 20-33 start the next year, he was replaced by Carlos Tosca. In 2003, he became a television analyst for the Baltimore Orioles, and in 2010, he rejoined the Jays broadcast team, replacing Jamie Campbell as the play-by-play announcer on Rogers Sportsnet broadcasts. He was also manager of the United States team in the 2006 World Baseball Classic. In later years, he teamed on Blue Jays television broadcasts with Dan Shulman and Pat Tabler, the three rotating among the two positions in the booth. On April 17, 2022, he took a leave of absence from the job after announcing he was fighting cancer. The treatment was successful and he was able to return to the broadcast booth at the end of July.

Buck is mentioned briefly in Jim Bouton's classic, Ball Four, by the name John Martinez. During a team meeting on how to pitch to certain players, and with a lack of knowledge of Buck, Seattle Pilots skipper Joe Schultz suggests the best course of action would be to "zitz him".