Note: This page is for 1970s and 1980s major league catcher/outfielder Charlie Moore; for others with the same name click here. 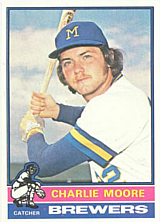 Charlie Moore played fifteen years in the majors, all but one with the Milwaukee Brewers. He was slightly built for a catcher (5' 11", 180 pounds), but this physical build gave him great versatility as a ballplayer. He was as good an outfielder as he was a catcher, and an athletic baserunner also (he finished his career with more triples (43) than home runs (36)).

The son of minor league pitcher Charlie Moore Sr., Moore saw the majority of his playing time behind the plate early in his career. In 1982, one year after the Brewers acquired catcher Ted Simmons, he was moved to right field where he appeared in 115 games. Despite hitting just .254 during the regular season that year, he hit .462 in the ALCS against the California Angels and batted .346 in the World Series versus the St. Louis Cardinals. He was the Brewers' regular right fielder in 1983 as well, then returned to catching.

On May 4, 1976, playing for the Brewers against the Texas Rangers, Moore hit the third home run of his career and his teammate Hank Aaron hit his 746th. The difference of 743 remained a record until August 8, 2007 when Barry Bonds hit his 757th and Matt Cain his first, for the San Francisco Giants against the Washington Nationals. On October 1, 1980, he became the second player in Brewers history to hit for the cycle, after Mike Hegan who had done so in 1976. He also stole two bases in that game, something that had never been done before in a cycle and would not be repeated until Cavan Biggio did so for the 2019 Blue Jays.