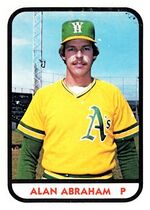 Brian Abraham was a minor league pitcher who both started and relieved over the course of a 15-year career. He spent all or part of nine seasons in AAA, an amazingly long run for someone who never played in the majors.

He was originally drafted by the Montreal Expos in the 23rd round of the 1969 amateur draft. He began his professional career that year at the age of 17, pitching for the GCL Expos. In seven relief appearances with them, he went 1-0 with a save and a 3.94 ERA.

In 1976, he wound up in the Cincinnati Reds organization as well as in the Mexican League. He pitched in only seven games in the US that year, all for the Chattanooga Lookouts. He posted a record of 2-0 and an ERA of 2.57 in those seven relief appearances. In Mexico, he was 3-6 with a 4.64 ERA for the Rieleros de Aguascalientes.

After four years of being around league or team average, Ogden reinvented himself as a relief pitcher for 1981, with huge success. He appeared in 55 games that year, split between two teams - the West Haven A's and Tacoma Tigers - starting only four. He posted a 10-4 record with 15 saves and an ERA of 1.89. With West Haven, he gave up only 33 hits in 56 innings and did not surrender a homer.