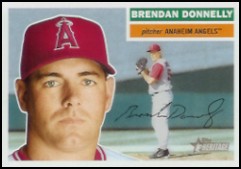 Brendan Donnelly pitched in the minors for almost a decade and played for six organizations before finally making his big league debut at age 30. He pitched in the majors for nine seasons, from 2002 to 2010. A workhorse, he appeared in as many as 65 games in a season.

Although born in Washington, DC, he grew up in New Mexico, attending high school and college in the state. Donnelly was selected by the Chicago White Sox in the 27th round of the 1992 amateur draft and made his pro debut with their rookie affiliate that season, going 0-3 with a 3.67 ERA and 1 save in 9 games. He began the next season on the disabled list with an elbow injury and was released by the Sox before even appearing in a game. Two months later, he was signed by the Chicago Cubs, and he spent the rest of 1993 at Class A, where he went 4-0 with a 6.28 ERA and one save.

He was let go by the Cubs in the off-season and spent the next year playing in an independent league. In 1995, he joined the Cincinnati Reds organization and saved 14 games in Class A before being promoted to the AAA Indianapolis Indians late in the season. He played three more years in the Reds system before being let go prior to the 1999 season. He began that year in the independent Atlantic League before stints in the Tampa Bay Devil Rays, Pittsburgh Pirates, and Toronto Blue Jays organizations that season. He remained with the Jays system to start 2000 but was released in July. He then returned to the Cubs organization, appearing in 9 games for the Iowa Cubs before being granted free agency after the season.

Prior to the 2001 season, Donnelly was signed by the Anaheim Angels, and he finally reached the majors with the club the following season (2002). He played a key role in the Angels' World Series victory, appearing in 5 Series games and only allowing 1 hit. He was the winner in Game 6, when the Angels overcame a 5-0 deficit to force a 7th and decisive game against the San Francisco Giants, which they won.

The next year, 2003 he had his finest big league season, posting a 1.58 ERA and striking out 79 in just 74 innings, and made the All-Star team. At that point, he had given up only 2 earned runs in his first 50 innings, for an 0.38 ERA. He was the winning pitcher in the All-Star Game. He suffered from a badly broken nose in 2004, which limited him to 40 games.

On December 15, 2006 Donnelly was traded to the Boston Red Sox for pitcher Phil Seibel. He went 2-1, 3.05 in 27 games for the Red Sox in 2007 then hurt his elbow. He collected his second World Championship ring that year, but was out of action in the postseason. He became a free agent at the end of the season, signed with the Cleveland Indians and in July of 2008, Donnelly was assigned to the Kinston Indians in the Carolina League. He worked his way back up to the majors following Tommy John surgery, making his first major league appearance of the year with the Indians on August 11. He posted an 8.56 ERA in 15 games, however, and became a free agent again.

After attending spring training with the Texas Rangers in 2009, he was released, signed by the Houston Astros, released again, and signed by the Florida Marlins on July 5th. He made it back to the Show with the Marlins and pitched very well, going 3-0, 1.78 in 30 games with 2 saves and 25 Ks in 25 1/3 innings. He signed with the Pittsburgh Pirates for 2010 and was a regular in their bullpen over the first half of the season, going 3-1, 5.58 in 38 games, then was released on July 29th and found no takers. Failing to draw any interest the following off-season and with his wife six months pregnant with the couple's first child, he officially announced his retirement on March 8, 2011.