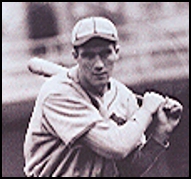 Bob Repass was an infielder ten years (1937-1949), two in the majors and ten in the minors (1937-1943;1946-1947;1949), losing two years to the Military and one to inactivity. Repass's parents were Charles (1883 ---) and Lena Repass (1892---). His father was a manager at a theater and his mother a homemaker. His father was from Iowa and his mother from Pennsylvania, as was her mother, of a father from Wales. He was the middle child of five children (Charles L., Audrey E., Robert W., John, Donald). By 1920, the family had moved to Hartford, CT where he graduated from Bulkeley High School (ironically named after baseball pioneer Morgan Bulkeley) in 1935, where he had been an exceptional athlete.

Repass was 21 years old when he broke into the big leagues on 18 September 1939, with the St. Louis Cardinals. His last game in MLB came on 10 August 1942 with the Washington Senators at the age of 24. He hit .242 with two HR and 24 RBI in his brief 84 game Major League career. He married Genevieve Ziemba in 1942, a marriage that lasted 64 years until his death.

Starting his pro career in baseball at the age of 19, Repass enjoyed a successful season with the New Iberia Cardinals of the Evangeline League when he hit .326 with 14 homers and 86 RBI. He then was with the Houston Buffaloes of the Texas League in 1938 (.250, 3 HR) and spent the majority of the 1939 season with the Three-I League's Decatur Commodores, hitting .316 with 82 RBI. That earned him a September call-up to the St. Louis Cardinals.

Repass was the regular third-baseman for Burt Shotton’s 1940 Columbus Red Birds of the American Association. He also had 31 games of shortstop duty thrown in, plus 18 starts at second-base. The Red Birds were in position to vie for the top spot with the Kansas City Blues, but had to settle for second-place, just four games behind the Blues. Bob hit .297 in 464 at-bats with 22 doubles and nine triples on a strong-swatting Red Bird club. The following season he was a cog in the Columbus machine as they took over the top spot in the league standings. Repass appeared in 117 games and hit .317 in 391 at-bats while covering shortstop and second-base during a very solid year. Along with his 18 doubles and 6 triples, he stole 11 bases, and showed better discipline at the plate, earning 45 walks while whiffing 32 times.

The bulk of his major league career came with the 1942 Senators, then he went to the Baltimore Orioles in the International League for the rest of the '42 and 1943 campaigns. During World War II he served overseas with the U.S. Army from 1943-1945 (OB). Although he was married with one child, he was drafted and inducted into the Army on July 8, 1943 and given a two week furlough which he spent with the Orioles and played his last game with them on July 18, 1943 before reporting (TSN). With that club in 1946, his power picked up again as he tagged the fences 19 times, driving in 67 while posting a .257 average. Baltimore was a power-friendly park and their players hit 34 more than any other team, led by the IL's top two homer men. Repass was 4th on the club, providing sufficient pop for a shortstop.

Bob's career evaporated after that. He hit successfully just 3 times in 31 AB with the Orioles in 1947 and spent most of the year with the Hartford Chiefs, batting just .233 in the Eastern League.

For many years, he worked as a steamfitter with the Plumbers and Pipe Fitters Local 777. After retiring from that job, he went on to be the Pro-Manager at the former Edgewood Country Club in Cromwell. He died at age 88 on 17 January 2006 and is buried at Rose Hill Memorial Park in Rocky Hill, CT.