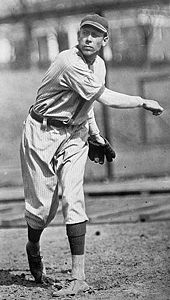 Bob Groom pitched ten years in the majors; his best years, spent with the Washington Senators were overshadowed by his Hall of Fame teammate Walter Johnson. Although he led his league in losses three times, he also had 119 wins. His best season was 1912 when he went 24-13. Groom also won 20+ games three times in the minors, with a peak of 29 victories in 1908 with Portland.

Groom was born in 1884 in a well-to-do family in Belleville, IL, located 15 miles from St. Louis, MO. His father and grandfather owned and operated a coal mine and the family occupied a grand mansion on Main Street. Bob Groom started playing semi-pro baseball in the St. Louis "Trolley League", which consisted of teams in cities like Belleville connected by trolley line with St. Louis. He formed a successful battery with his cousin Alec Groom in 1902 and 1903, although newspapers at the time called them brothers. He threw a wide curveball that dazzled opposing batters, and by his count, would fan about fifteen opponents a game. In 1904, he was signed to pitch for the Class D Fort Scott Giants of the Missouri Valley League. It's a wonder he did not give up his professional career at the end of the year, as he ended with an 8-26 record in 37 games. His mother died that winter, and pressure was put on him to concentrate on his studies. Still, he kept at baseball and in 1905 had a much better season for the Springfield Highlanders of the Western Association, a Class-C league. He went 23-21, and then followed that with a 20-18 record in 1906.

He had caught the attention of Walt McCredie, manager of the Portland team in the Pacific Coast League and headed west in 1907. He pitched a no-hitter, the first in team history, on June 16th against the Los Angeles Angels, but went only 19-27 overall. Everything clicked for him in 1908: he led the league with 29 wins, going 29-15 in pitching over 400 innings. He was described in team programs as "the hardest twirler (to hit) on the Western Slope". He was ready for the Major Leagues. After the season, he was scouted by a few teams, but signed with the Washington Senators at the same time as lefty Dolly Gray, who was pitching for Los Angeles.

Bob Groom did not find immediate success in the American League. His initial season, 1909, ended with a dismal 7-26 record, leading the league in both losses and walks (with 105). His best game of the season came in relief on July 16th. He relieved Gray in the 8th inning of a scoreless tie with the Detroit Tigers, and kept on pitching goose eggs until the game, still scoreless, was called on account of darkness at the end of 18 innings. That performance earned him the nickname "Long Bob", which was also fitting given that at 6' 2", he stood among the tallest players of the day. In spite of that poor won-loss record, he did top 200 innings pitched that season, the first of 9 consecutive seasons in which he would do so. He improved significantly in 1910, posting a 12-17 record. In an early game against the Tigers, he had the rare feat of striking out the great Ty Cobb three times, and would always give him trouble whenever he faced him in following years. Cobb would name Groom on his all-time team of "toughest opponents" when he retired. After the season, he enrolled in medical school at Saint Louis University, then was married in November.

Groom went 13-17 in 1911, then broke out with an outstanding season on 1912. He went 24-13, with a 2.62 ERA in 316 innings, striking out a career-high 179 batters. Before that season, he had faced a difficult choice: having completed two years of medical studies, he was ready to begin a full-time internship, which would have precluded playing baseball in 1912. After hesitating for a while, he gave up medicine (the fact that he had his family's coal business to fall back on if things went sour would have helped). Still, in spite of his great season, he was overshadowed by his teammate the "Big Train" Walter Johnson, who was unquestionably the fans' favorite in Washington. Opponents respected him, however. Hall of Fame umpire Billy Evans stated that no other pitcher could match his outstanding overhand curveball or "drop curve", George Uhle being the only other man in the discussion. In 1913, he dropped to 16-16, allowing the most earned runs in the league.

In 1914, the American and National Leagues felt the challenge of the newly-formed Federal League, which staked a claim as the third major league by offering large salaries to established major league players. Groom was one of those who took the bait, signing with his hometown St. Louis Terriers, a move that would allow him to live with his family at home. St. Louis, led by an aging but still effective Mordecai Brown, was not one of the better teams in the league, and the quality of his teammates reflected itself on the workhorse of its pitching staff, who once again led his league in losses, this time with a record of 13-20 in 42 games, even though his 3.24 ERA was better than the league average (his ERA+ was 104). In 1915, with virtually the same ERA, he improved to 11-11 as the Terriers finished first by percentage points. He was relegated to the 4th man on the staff however, behind 20-game winners Dave Davenport, Doc Crandall and Eddie Plank. He umpired one Federal League game that season.

After baseball, Groom returned to Belleville, where he helped run the still-functioning Trolley League, managing the town's entry one year, then founded the town's American Legion team. He kept up with old acquaintances including his catcher in Washington, Gabby Street, who became a successful manager and broadcaster. He would regularly attend games, including the 1944 World Series between the Browns and St. Louis Cardinals. He died in his hometown in 1948.