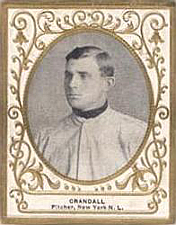 "Crandall is the Giants' ambulance corps... He is first aid to the injured. He is the physician of the pitching emergency, and they sometimes call him old Doctor Crandall. He is without an equal as an extinguisher of batting rallies and run riots, or as a pinch hitter." - Damon Runyon, 1911

Known for his sharp curveball, Doc Crandall was one of the first pitchers to be used primarily in relief. While with John McGraw's New York Giants, Crandall picked up his nickname due to his ability to help recuperate "sick" Giant games.

Doc came up during the ultimately doomed 1908 Giants season. In his only season primarily as a starter, he was 12-12 with 13 complete games in 214 2/3 innings. He would make starts for the Giants during the remainder of his tenure in Gotham, but made the transition to relief seamlessly, leading the National League in games finished each of the next four seasons. He spun two shutouts and saved five games in 1910 to finish 17-4, 2.56, batting an impressive .342/.385/.521 in 73 at bats. The Giants gave him starts at shortstop and second base in 1911, a 15-5, 2.63 season in which his bat fell to .239/.295/.372, driving in 21 runs while belting 2 homers. He became the first man to make over 30 relief appearances in a season in 1913, making two appearances with the St. Louis Cardinals before returning to the Giants after two weeks.

Crandall was player-manager of the 1927-1928 Wichita Larks. After his playing career, he was a coach for the Pittsburgh Pirates from 1931 to 1934. He managed the Des Moines Demons in 1935, and coached the Seattle Indians in 1937 and Sacramento Solons in 1938. In 1943, Crandall was an inaugural inductee into the Pacific Coast League Hall of Fame.

His son, Jimmie Crandall, never reached the majors as a player but spent a season as a St. Louis Browns coach. His brother Karl was a minor league infielder from 1907 to 1924.