Note: This page links to Hall of Fame outfielder Billy Williams; for other with similar names, click here.

Outfielder Billy Williams could hit for power, for average, and was an "Iron Man", playing in 1,117 consecutive games. Though often overshadowed by his Chicago Cubs teammates Ernie Banks, Ferguson Jenkins, and Ron Santo, Williams was elected to the Hall of Fame in 1987.

The younger brother of minor leaguer Franklin D. Williams, Billy grew up in Mobile, Alabama at the same time as Willie McCovey. After high school, he was offered a scholarship to play football at Grambling State University, but instead decided to pursue a baseball career.

Signed by Chicago Cubs scout Ivy Griffin in 1956, Williams reached the majors briefly in 1959 and 1960. After starting in right field for the Cubs on Opening Day in 1961, he struggled, hitting just .211 with no home runs in April. He was benched for a time, but in mid-June, he moved to left field and began to heat up. On June 16th, the day after his 23rd birthday, he hit a game-winning grand slam against the San Francisco Giants and went on to start every game for the remainder of the season. He ended the year with a .278 average, 25 home runs, and 86 RBI and was named the 1961 NL Rookie of the Year. His 25 homers were a Cubs record for a rookie until Kris Bryant came along in 2015. He would go on to hit more than twenty homers in the next dozen seasons.

In 1962, Williams made the National League All-Star team for the first of six times in his career, and the following September, he began a streak of 1,117 consecutive games played. He did not miss a game in seven years and broke Stan Musial's NL record (since broken by Steve Garvey). He hit for the cycle in a July 17, 1966 game against the St. Louis Cardinals and clubbed three homers in a September 10, 1968 contest against the New York Mets. 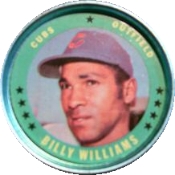 Williams had his finest year at the plate in 1970, hitting .322 with 42 home runs and 129 RBI and leading the NL with 205 hits and 137 runs scored, but finished second in Most Valuable Player Award voting that year to Johnny Bench. Two years later, he won a batting crown with a .333 average, clubbed 37 homers, and drove in 122 runs, but again finished behind Bench for the MVP.

Following the 1974 season, Williams was dealt to the Oakland Athletics. He finished his career with two disappointing seasons there in 1975 and 1976, primarily playing designated hitter, and saw his only postseason action in the 1975 ALCS.

Williams was elected to the Baseball Hall of Fame on January 14, 1987 by the Baseball Writers Association of America. In August of that year, his #26 was retired by the Cubs.