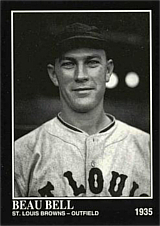 Beau Bell was a major star for a couple seasons before his career petered out. His sudden emergence as a top hitter was due to advice from Rogers Hornsby, his manager on the St. Louis Browns. After his major league career, he had another career as coach of the Texas A&M team (1951-1958), leading the school to the 1951 College World Series.

Born Roy Chester Bell in Bellville, Texas in 1907, he acquired his nickname when he was a boy. He liked to play "ring around the rosy" with local girls of Czech descent. Czech families in Texas were commonly referred to as Bohemians, so Bell's friends began to call him "Bo." Later, he changed the spelling to "Beau." Beau went to Texas A&M University, graduating in 1931. Playing for the Galveston Buccaneers in the Texas League in 1934, he hit .337 with 51 doubles.

It was said that drinking problems contributed to the demise of his career, but it may also be noted that he broke in at a late age (27), and did stay in the majors through age 33, which at the time was a fairly old age for a ballplayer. The 1941 Indians had only two position players older than Bell. Both of them were 34, only a year older than Bell, both of them hit under .250, and both were catchers. On the other hand Bell, whose range in the outfield had never been great, slipped in range quite a bit his last year. The most similar player to him, according to similarity scores, is Happy Felsch, which is a comparison that does not take into account how each player's career ended. Another player on the list of the most similar players is an interesting comparison - Pete Reiser, whose career dropped off like Bell's, but for quite different reasons. Reiser also finished out his career at age 33.