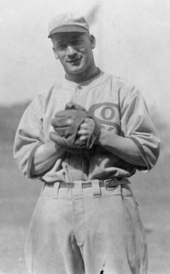 "There was so much crookedness around, you sort of fell into it." - Happy Felsch, talking to Eliot Asinof about the atmosphere in major league baseball in 1919

Happy Felsch, one of the "Black Sox", was "born with a smile", according to his father. Born in Milwaukee, WI in a large German immigrant family, he never had more than a sixth grade education. He had a tryout with the minor league team in Eau Claire. Later, he caught on with the Fond Du Lac team, and moved up to the Milwaukee Brewers of the American Association in 1913. The next year, he was playing well and was purchased by the Chicago White Sox.

As a rookie in 1915, he hit .248 with 11 triples. His batting average was the same as the league average that year, when he was suffering the effects of a nagging leg injury. The next two years he blossomed, hitting .300 and .308, both times with at least 10 triples. The second year (1917), he drove in 102 runs, becoming the first member of the White Sox to top 100 in a season, and the team won the World Series against the New York Giants. In the 1917 Series, he batted fifth, behind Eddie Collins and Shoeless Joe Jackson, and ahead of Chick Gandil in the batting order. He hit a key home run in Game 1, which the White Sox won 2-1.

He missed most of the 1918 season due to service in the military during World War I (he was actually working for the Milwaukee Gas Company as part of the wartime economic effort). The next year, 1919, was not one of his best years. He hit .275 in the regular season, and .192 in the tainted World Series.

In 1920, at age 28, he had his best season. The lively ball era was starting, and while that inflated everybody's batting average, Felsch truly had his best year. He hit .338, with 40 doubles, 15 triples, and 14 home runs. He drove in 115 runs. He was fifth in the league in slugging. He was fourth in the league in doubles, fourth in triples, and also fourth in home runs. One can speculate that he would have thrived in the rest of the lively ball era, as he adjusted to hitting home runs very quickly when times changed.

He had a strong arm, and was highly regarded as a defensive player. His range factors as a centerfielder during his career were excellent.

Because his major league career ended so abruptly, none of the most similar players, using the similarity scores method, seem quite appropriate. A similar modern player might be Bobby Bonilla, although Bobby was not tarred with scandal. However, both of them took a couple years to develop, and then hit for average and power (without leading the league). Felsch was a better defensive outfielder, but Bonilla was the one able to go on to a long, financially-lucrative career.

Although acquitted in the Black Sox criminal trial, Happy never appeared again in major league baseball, as he and seven other implicated teammates were banned for life by Commissioner Kenesaw Mountain Landis. He played baseball after that in amateur and semi-pro games, and barnstormed with other Black Sox players. He was forced to play in out-of-the-way places such as Montana and Western Canada to escape the Commissioner's threat of retribution against anyone who shared the field with the banned players.

In 1924, Felsch and former teammates Joe Jackson and Swede Risberg sued the White Sox for back pay. He claimed an unpaid $ 1,120 from his 1920 salary as well as $ 100,000 in damages for having destroyed his reputation and ability to earn a living. He dropped the latter claim as too hard to prove and settled out of court the amount of salary claimed plus interest and court costs.

Outside of baseball, Felsch ran a grocery store and some drinking establishments, and was a crane operator. The bar in Milwaukee was known as a hang-out for amateur ballplayers and other fans of the game. Towards the end of his life he was interviewed by Eliot Asinof who was conducting research for his book Eight Men Out about the 1919 scandal; Felsch proved to be one of the author's best sources.