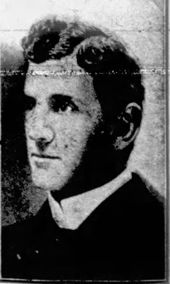 He had been a minor league outfielder and shortstop from 1890 to 1901, when an arm injury ended his playing career. He started his career with the Lebanon, PA team in the Eastern Interstate League in 1890, then played for the Binghamton Bingos of the Eastern League in 1892. He split the 1893 season between the Easton Dutchmen and Scranton Miners of the Pennsylvania State League and was with the Hazleton Barons in the same circuit in 1894 and 1895. He led the league with 139 runs in 1895. He moved to the Philadelphia Athletics when the circuit became the Atlantic League in 1896. he played for three different teams in the Atlantic League in 1897: Philadelphia, the Newark Colts and the Hartford Bluebirds. In 1898, he did this one better, as he lined up with four different teams: the Taunton Herrings of the New England League, the Allentown Peanuts of the Pennsylvania State League, and the Auburn Maroons Johnstown/Palmyra Mormons of the New York State League. In 1899, he was with the Paterson Giants of the Atlantic League, then in 1900 moved west to play for the Pueblo Indians of the Western League. His final season as a player came in 1901 with the Reading Coal Heavers, back in the Atlantic League. he was a regular for most of this time, his two best seasons coming with Hazleton as he hit .305 and .314 in 1894 and 1895.

Moran took credit for bringing Willie Keeler into professional baseball. He suggested him as a replacement for the injured John Rainey while playing for Binghamton in 1892. Keeler was signed from an amateur squad and hit .373 at age 20.

Moving to umpiring, he worked in the Western League in 1902 before getting the call from the National League. In his first season, he had a whopping total of 26 ejections, most in the circuit. Things were a bit calmer the next year, with only 8. He then worked in the Eastern League from 1905 to 1908 and the Southern Association in 1909 before working a partial season back in the NL in 1910. While he had worked three quarter of his games behind the plate in his first stint, he was almost exclusively a base umpire the second time around. He is listed on his Sporting News card as an NL umpire in 1911, but did not work any games that year. After that, he went back to the minors, working in the Northwestern League from 1912 to 1914 and back in the Southern Association from 1915 to 1917. He was working amateur games in Bethlehem, PA when the NL gave him a call to help out in 1918, and in 1919, he was in the American Association. His career continued in the International League in 1920 and 1921, the South Atlantic League from 1922 to 1924, the Three-I League in 1925, the Pacific Coast League in 1926 and 1927, and finally back in the Eastern League in 1928 and 1929. He retired at that point, but lived on for many years, passing away in 1964 at the age of 95.