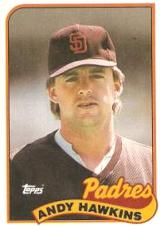 Andy Hawkins was signed as a 1st round pick in the 1978 amateur draft by the San Diego Padres and scout Al Heist.

Hawkins threw eight innings of no-hit ball on July 1, 1990 against the Chicago White Sox but still lost 4 - 0. Although Hawkins allowed no hits, his New York Yankees fielders failed him by making three errors and allowed four unearned runs to score in the 8th inning. Since it was a road game, the White Sox did not bat in the bottom of the 9th. Because Hawkins only pitched eight innings, the no-hitter was deemed unofficial a year later when the definition was changed. In his next start after the quasi no-hitter, on July 6th, Hawkins took a shutout into the 12th inning, but the Yankees had 10 hits and 12 left on base, seven in scoring position, over the first 11 innings, but still were unable to score. In the 12th, Hawkins let in two runs to lose 2-0.

Twelve days after his "no-hitter", Hawkins was on the losing end of Melido Pérez's six-inning, rain-shortened "no-hitter".

He was the most effective pitcher for the San Diego Padres during their first World Series appearance in 1984 against the Detroit Tigers. Used in long relief, he pitched 12 innings in 3 games, allowing 1 run on 4 hits. He was the winner in Game 2 on October 10th when he relieved Ed Whitson with one out in the 1st and pitched scoreless ball until the end of the 6th. In Game 5, however, he again had to step in when Mark Thurmond only recorded a single out as the Padres' starter, and he gave up only one run in 4 innings but was still charged with his team's 8-4 loss. His Game 2 win remains the only one ever recorded by a Padres pitcher in the World Series, as they were defeated, 4 games to 1, that year and were swept in their only other appearance in 1998. After his World Series heroics, Hawkins started the 1985 season 11-0. No Padres pitcher had won more than five consecutive games to start a season since that year, until James Shields won his first 6 in 2015. He finished that season with a record of 18-8 and a 3.15 ERA.

In the middle of his 8th season as a pitching coach in the Texas Rangers organization, he was promoted to the big-league club on August 1, 2008 when pitching coach Mark Connor and bullpen coach Dom Chiti were fired as a result of the team's chronic problems on the mound. He stayed with the team until the end of the 2015 season.