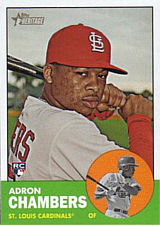 Adron Chambers played parts of three seasons with the St. Louis Cardinals, winning a World Series ring as a pinch runner extraordinaire in 2011.

Chambers grew up in Pensacola, Florida, where he was a high school football star. He went to Mississippi State on a football scholarship but was suspended after being accused of sexual battery (charges which were later reduced to simple assault and indecent exposure). He then enrolled at Pensacola Junior College, playing baseball for the first time since his junior year in high school. Drafted by the Cardinals in the 38th round of the 2007 amateur draft, Chambers was signed by scout Steve Turco and debuted that summer, hitting .279/.362/.360 in 36 games for the Johnson City Cardinals. In 2008, he played for the Quad Cities River Bandits, hitting .238/.322/.345 with 13 stolen bases in 21 attempts in 95 games. He played for the Palm Beach Cardinals in 2009, hitting .283/.370/.400 with 21 stolen bases in 33 tries and 16 triples in 122 games. He led organized baseball in three-baggers (one ahead of Jon Gaston), the first Cardinal farmhand since Ray Lankford to hit that many, and was fifth in the Florida State League in OBP. He also showed off a strong arm, with 11 outfield assists.

Chambers split 2010 between the Springfield Cardinals (75 games) and Memphis Redbirds (37 games), hitting a combined .283/.379/.405 with 14 steals in 20 attempts in 112 games. Back with Memphis to start 2011, he hit .277 with 10 home runs for the team before earning a September call up to St. Louis. In 18 games for the Cards (mostly as a defensive replacement or pinch runner), he was 3-for-8 with a triple and 4 RBI. He saw action in each round of the postseason except the World Series, hitting 1-for-5 with 2 runs scored as the Cards triumphed. He spent most of 2012 back with Memphis, hitting .319 in 96 games, but got into 41 games for St. Louis, hitting .222 with 2 triples, then appeared in the postseason again as the Cards bowed in the 2012 to San Francisco. He finished his career with 25 regular seasons (.154 in 26 at bats) and another 5 games in the postseason as the Cards fell to the Red Sox in the Fall Classic.