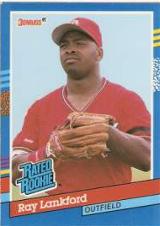 Outfielder Ray Lankford played from 1990 to 2004 for the St. Louis Cardinals and San Diego Padres. Primarily a centerfielder, he was known for his combination of power, speed, and defensive prowess. Lankford posted one of the longest and most distinguished careers in the history of Cardinals baseball.

Lankford broke into the majors with St. Louis in August 1990, and took over the centerfield position previously occupied by former National League Most Valuable Player Willie McGee. He started his career as a leadoff man, where his speed and plate discipline made him a potent force. In his first full season in 1991, he led the league with 15 triples, stole 44 bases, and scored 83 runs, earning him a third place finish in the Rookie of the Year Award voting. In 1992, he began to hit for more power, and posted a breakout season with a .293 batting average, 20 home runs, and 42 stolen bases. That season established Lankford as one of the best all-around outfielders in the game. He eventually moved down in the batting order to take further advantage of his power hitting ability.

Lankford posted five seasons of 20 home runs and 20 stolen bases with the Cardinals (1992 and 1995-1998), making him the only player in franchise history to accomplish the feat more than once. He also was an impressive fielder, posting a 2.90 range factor in 1992 and committing only one error in 1996. In the latter season, he led the league with a fielding percentage of .997 but was still not awarded a Gold Glove.

He was selected for the 1997 All-Star Game, and posted an offensive career year the following season. In 1998, he hit .293 with 31 home runs, 105 runs batted in, and 26 stolen bases. It was his late-season surge batting cleanup that helped Mark McGwire, hitting in front of Lankford in the Cardinal order, to set the single-season home run record with 70. Following the 1998 season, Lankford had knee surgery and was moved to left field. In his first year at the position, he posted a career high .306 batting average and 15 home runs in an injury-shortened season.

Lankford was traded from St. Louis to San Diego during the 2001 season. He played for the Padres until 2002 but his tenure there was marred by injury. He took the 2003 season off to recover before returning to St. Louis, where he finished his career in 2004. Lankford retired among the Cardinal Top 10 in numerous statistical categories, including home runs (third), stolen bases (fifth), runs scored (eighth), runs batted in (eighth), and bases on balls (fourth).

Lankford hit more home runs at Busch Stadium (123) than any other player, and hit a pinch homer there in his final major league at bat on October 3, 2004. He is one of only two players to have achieved the dubious feat of wearing the "Platinum Sombrero" (i.e., striking out five times in a game) three times in his career; the other is Sammy Sosa, who holds the all-time record with four instances.