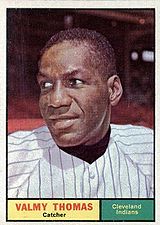 While he wasn't really from Puerto Rico, Thomas did play winter league ball there. He also served in the Navy in Puerto Rico at the end of World War II. The catcher was Rookie of the Year in 1950-51 and became a mainstay of the great Santurce Cangrejeros teams. He also played in Canada's Provincial League as a member of the Pittsburgh Pirates organization. He found the pay unsatisfactory, though, and went to play in the Dominican Republic, where the league played during the summers for four seasons in the early 1950s. His status in the U.S. was "voluntarily retired."

Thanks to the friendly relationship between Santurce owner Pedrín Zorrilla and Horace Stoneham, Valmy returned to North America and joined the New York Giants organization. In 1956 he spent most of the season with the Albuquerque Dukes, hitting .366. He made his major league debut the following April, in 1957, in the Giants' first game of the season.

Valmy's first season, as a semi-regular for New York, was his best. His roommate was another Caribbean, Nassau cricketer-turned-shortstop Andre Rodgers. He also saw a good bit of action for the first San Francisco Giants team in 1958 and the 1959 Philadelphia Phillies, who obtained him and Crabber batterymate Ruben Gomez for Jack Sanford. The deal looked logical but turned out poorly, as Sanford became a 24-game winner.

Thomas spent most of the next two years in the minors, though he did get time with the Baltimore Orioles in 1960 and Cleveland Indians in 1961. He was taken by the Indians in the 1960 Rule V Draft from the Rochester Red Wings roster. He is the only major leaguer to play five years, each in a different city. An innovator, the backstop wore a light, flexible chest protector inside his uniform, even when he was at bat.

Thomas was a member of five Puerto Rican champions with the Crabbers before he wrapped up his Puerto Rican career in 1962-63. He gave way to his understudy, future Oriole Ellie Hendricks. He then came home to St. Croix, where he set up many baseball events, oversaw all recreational programs on the island, and remained closely involved in local affairs.