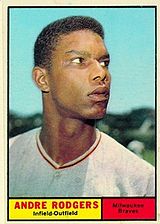 Andre Rodgers was considered the first native of the Bahamas to play in the major leagues until the Negro Leagues were retroactively deemed major leagues in 2020, Ormond Sampson thus preceding him. The rangy 6' 3" shortstop had never played the game of baseball at any level in 1954 when he was recommended to the New York Giants by a Nassau man. The son of a famous cricket player, he was playing the game for the St. John's College team in Nassau at the time.

The Giants told him he could come to their spring training facility in Melbourne, FL, at his own expense and if they signed him he would be reimbursed. The 19-year-old cricket player was signed in 1954 and sent to the Olean Giants in the class D PONY League where he hit .286.

He moved up to St. Cloud Rox of the class C Northern League in 1955 where he not only won the batting title, hitting .387, but he also led the league with 175 base hits and 133 runs scored. He was named to the postseason All-Star team at shortstop. He first made it to the majors with the Giants in 1957.

Rodgers continued to put up big numbers in the minor leagues, winning the Pacific Coast League batting title with a .354 average for the Phoenix Giants, helping his team to the league title in 1958. He was traded to the Chicago Cubs after the 1960 season and in 1962 Andre hit .278 in 138 games as Ernie Banks moved over to first base to let him take over the shortstop position.

On December 9, 1964 Andre was traded by the Cubs to the Pittsburgh Pirates for Roberto Pena and cash. His final three years were spent with the Pirates as the former cricket player concluded an 11-year major league stay with a lifetime .249 mark. Rodgers had been in the minors all or part of seven of his baseball years, where he hit for a minor league career mark of .310 along with 96 homers.

Andre's brother, Lionel Rodgers, played with the Fresno Giants in the California League in 1960. He was in a car crash and died on January 11, 1961. Another brother, Adrian Rodgers, also played in the minor leagues.