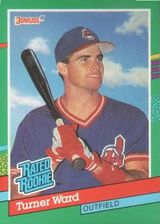 Outfielder Turner Ward was signed as an 18th round pick in the 1986 amateur draft by the New York Yankees and scout Jack Gillis. In spring training of 1989, he broke his ankle. In his second Major League game, in 1990, Ward collected 6 RBI. He is remembered by many for running through the right field wall at Three Rivers Stadium while making a catch in a 1998 game. Turner Ward's 1997 season is remembered as being one of the premier statistical seasons ever recorded by a pinch-hitter. Over the course of nearly 200 plate attempts, Ward recorded a .353 batting average with a 1.007 OPS.

Ward was a coach with the GCL Pirates in 2006 and moved to the State College Spikes as manager the next year. In 2008-2010 he was a coach for the Mobile BayBears then became the team's manager in 2011 and 2012. In 2013, he was named assistant hitting coach of the Arizona Diamondbacks, then was promoted to hitting coach before leaving after the 2015 season. In 2016, he was named hitting coach of the Los Angeles Dodgers. In 2017, he received particular praise for his work with mercurial outfielder Yasiel Puig, whose lack of focus had pushed the team to the brink of giving up on him, in spite of his raw talent. By the end of the year, he was a major contributor to a World Series team. After the 2018 season, he left the Dodgers to join the Cincinnati Reds as hitting coach under new manager David Bell in 2019. Perhaps not coincidentally, the Reds traded for Puig before that season. However, ended the season with Cleveland and Ward was dismissed at the end of the year.

He returned to the coaching ranks in 2022 as assistant hitting coach with the St. Louis Cardinals.

His brother is Lance Ward