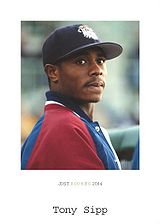 Tony Sipp was drafted by the Cleveland Indians in the 45th round of the 2004 amateur draft. He was signed by scout Tim Moore and made his pro debut that summer.

He has been used as a prototypical LOOGY throughout his major league career after making his debut with the Indians in 2009. In his first five big league seasons, with the Indians from 2009 to 2012 and with the Arizona Diamondbacks in 2013, he did not start a game and in 304 appearances, he pitched only 258 innings. He recorded only 2 saves during that period, but had a good won-loss record at 14-9.

In 2014, Sipp joined the Houston Astros in early May after going to spring training with the San Diego Padres and failing to make the team. With Houston, he got to play the outfield twice in less than a week. On June 9th against the Diamondbacks, he struck out Gerardo Parra to start the 8th, then gave way to righty Jerome Williams, who got to face Paul Goldschmidt. However, manager Bo Porter kept him in the game by putting him in left field, then after Williams had walked Goldschmidt, Sipp went back to the mound to face Miguel Montero, whom he also struck out. Kyle Farnsworth then replaced him, but this time he left the game. On June 15th, in the 8th inning against the Tampa Bay Rays, Sipp got Kevin Kiermaier to hit into a force out and again moved to left field as Josh Zeid was brought in to face Evan Longoria, whom he struck out to end the inning. Tony was back on the mound when the 9th inning started. One thing Porter had forgotten, however, as it had not come into play in the interleague game against Arizona, was that as soon as Sipp took the field in another position, the Astros forfeited the use of the designated hitter for the rest of the game and Sipp was now in the line-up in place of DH Chris Carter, and not of LF Robbie Grossman as Porter had thought. Crew chief Jeff Nelson interrupted the game to make sure both managers and the scoreboard were aware of that fact. Sipp had played some outfield in college, although he said after his second appearance in the field that he was glad there was no ball put in play while he was playing the unfamiliar position. Also ironic was the fact that Sipp had still not had a single plate appearance in his career at that point.