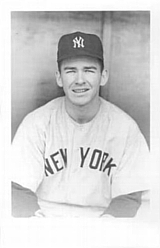 Tommy Carroll ended his three-year major league career with a .300 batting average (albeit in only 30 total-bats). He spent time with the New York Yankees and Kansas City Athletics.

Signed by the Yankees on January 26, 1955 out of the Notre Dame as a bonus baby, Carroll appeared in his first big league game on May 7. He was the ninth-youngest player in the American League that season. Like many of his fellow bonus earners, he spent most of his time sitting on the bench and watching, and occasionally being used as a pinch runner (33 times over the two seasons he was forced to spend in the majors due to league rules of the time). He was used twice as a pinch runner in the 1955 World Series, which the Yankees lost to the Brooklyn Dodgers, in what he would later call this the greatest thrill of his career. In 1956, still forced to stay in the bigs, he was the 10th youngest player in the league at 19. The Yankees again reached the World Series, although Carroll's contribution to the success was minimal, and he was not used in the victory over the Dodgers.

Having fulfilled his quota of bonus man big league time, he spent the next couple of seasons in the minors. Signed as a shortstop, he was judged too tall for the position at 6'3" and moved to third base. In 1957, playing for the Richmond Virginians of the International League, he hit only .213, although with some power. It is not surprising that he was somewhat overmatched, as the league's caliber was quite high, and his experience up to that point had been minimal. Seeing this, the Yankees sent him down to the New Orleans Pelicans of the Southern Association at the start of 1958, after which he was promoted to the Denver Bears of the American Association; overall, he hit .283. His career was derailed once again when he had to spent six months in military service in the army after the season, slowing any momentum he was starting to build.

On April 12, 1959, he was traded to the Kansas City Athletics, with Russ Snyder, for Mike Baxes and Bob Martyn in one of a revolving door of trades between the Yankees and A's at the time. He played little for his new team and, by early June, was back in the minors... for good. He also played in the winter leagues in Venezuela during those years, but failed to develop any more. He retired from baseball after spending the entire 1960 season in the minors. Overall, Tommy was a poor fielder - he had a career fielding percentage of .905 - but finished his brief big league career with a .300 batting average in his limited playing opportunities.

After retiring, he put his education to good use by joining the State Department. He had a long diplomatic career, serving in several countries in Latin America.