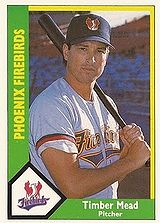 Timber Mead pitched as high as AAA. His son Tyler Mead would also pitch in the minors.

Mead was picked by the San Francisco Giants in the 6th round of the January 1985 draft. He debuted as a pro with the Everett Giants, going 7-5 with a 4.58 ERA that summer. He was one win shy of Northwest League co-leaders Ed West, Jeff Shaver, Tim Burcham and Steve McGuire and Everett wound up with the title. With the 1986 Clinton Giants, Mead went 9-6 with a save and a 3.57 ERA. He was then traded with Frank Williams and Mike Villa to the Cincinnati Reds for Eddie Milner.

In 1991, Timber toiled for the independent Reno Silver Sox and had a good summer at 13-7, 3.36. He was 10th in the California League in ERA and was named to the league's All-Star team, joining Rich Huisman, Greg Hansell and Gary Sharko as the selected hurlers. In 1993, Mead split time between two Mexican League clubs, going a combined 10-10 with a 4.75 ERA. He was 0-3 with a 4.72 ERA for the Monclova Steelers to close his career.

This biographical article is missing the person's: birth place
Retrieved from "https://www.baseball-reference.com/bpv/index.php?title=Timber_Mead&oldid=1186729"
Categories: