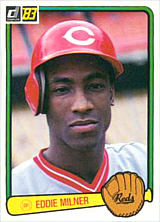 Nicknamed "Greyhound" for his speed, outfielder Eddie Milner played parts of nine seasons in the majors, primarily with the Cincinnati Reds.

A native of Columbus, Ohio, Milner grew up in an athletic family that included brother Hobson Milner, who was selected by the Minnesota Vikings in the 12th round of the 1982 NFL draft [1], and cousin John Milner, who also played in the majors. Eddie attended Central State University and was selected by the Reds in the 21st round of the 1976 amateur draft. He made his pro debut that summer with the Billings Mustangs, hitting .255 in 67 games while swiping 17 bases.

Milner reached the majors as a September call up with Reds in 1980, going hitless in 6 games with the Reds but scoring a run. After another big league cup of coffee the following year, he saw regular playing time with Cincinnati in 1982, hitting .268 with 18 stolen bases in 113 games. He was the team's regular center fielder the next summer and hit .261 while stealing 41 bases. He continued to play regularly for the Reds through 1986, the season he hit a career best 15 home runs.

Prior to the 1987 campaign, Milner was traded to the San Francisco Giants for three players. He hit .252 in 101 games that year, primarily backing up outfielders Chili Davis, Jeffrey Leonard, and Candy Maldonado. He also saw his only postseason action in the bigs that fall, going 1-for-8 as the Giants fell to the St. Louis Cardinals in the NLCS. After one year in San Francisco, he returned to Cincinnati as a free agent. However, he missed the first half of the 1988 season when he was suspended for cocaine use. Commissioner Peter Ueberroth had initially suspended him for the entire season, but he was reinstated in July after completing drug rehab. He ended up hitting .176 in 23 games that summer, his final pro campaign.

In 1990, Milner played for the Fort Myers Sun Sox of the Senior Professional Baseball Association. He appeared in 14 games and was batting .156 when the league folded.

After baseball, he became an ordained minister. He died in 2015 at age 60.