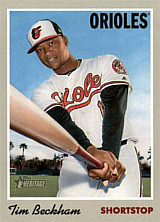 Tim Beckham was the first pick of the 2008 amateur draft and made his big league debut in 2013. He is the brother of Jeremy Beckham.

Tim was MVP of the AFLAC All-America High School game in 2007, hitting two sacrifice flies, drawing a walk and tripling in a run in a 5-4 East win. He connected for the winning sac fly in the 9th inning against Aaron Hicks. He hit .482 with 23 steals as a senior. Considered the best five-tool player available, the Tampa Bay Rays chose him with the first overall choice of the 2008 amateur draft. He was signed by scout Milt Hill and began his pro career that summer. Beckham made his debut on June 26, 2008, for the Princeton Rays, playing DH and batting second. He went 1 for 4, despite not hitting a ball out of the infield, and scored once in a 7-6 win over the Burlington Royals. Overall, he hit .246/.309/.350 with two home runs and 14 RBI in 48 games split between the Princeton Rays and Hudson Valley Renegades (two games). In 2009, he hit .273/.328/.389 with five home runs, 63 RBI and 13 stolen bases for the Bowling Green Hot Rods. He hit .256/.346/.359 for the Charlotte Stone Crabs in 2010. He split 2011 between AA and AAA, hitting .271 with 12 home runs, and was selected to play for the United States team in the 2011 Futures Game.

On May 1, 2012, Beckham was suspended 50 games for violating the Minor League Baseball drug program for the second time. He was hitting .214 in 13 games for the AAA Durham Bulls at the time, after attending spring training as one of the 40 players on the Rays' major league roster. In a statement released by the Rays, Beckham said: "I regret that my poor judgment resulted in me letting my teammates and the Tampa Bay Rays organization down. I take full responsibility for my actions and I will use this experience to refocus my commitment to baseball. I recognize that I am blessed to be able to play baseball for a living. I owe it to my teammates, my family, and to myself to respect the game and the responsibilities that go with playing it as a professional. I am sorry." As a result of the suspension, 2012 was basically a lost year for him, as he played only 72 games, hitting .256/.325/.361. Looking increasingly like a bust, Beckham went back to Durham in 2013 and had probably his best season since turning pro. He played 122 games as the Bulls' primary shortstop, also seeing time at second base. He hit .276/.342/.387 with 25 doubles and 7 triples, scored 71 runs and stole 17 bases in 24 attempts. His batting average was his highest in six minor league seasons and his OBP only a few points below his 2010 high-water mark. He was called up to Tampa Bay after the minor league season and made his major league debut September 19, pinch-hitting for Matt Joyce in the 8th inning of a game against the Texas Rangers; he singled off Tanner Scheppers and remained in the game to play shortstop as the Rays lost, 8-2. He went 3 for 7 that season, then spent all of 2014 in the minor leagues, limited to 24 games by an injury.

Tim made the Rays' roster out of spring training as a backup player in 2015, then quickly made his presence felt when he hit two homers as a pinch-hitter over the first ten games of the season. The first of these was his first major league homer, off Mike Dunn of the Miami Marlins, in a 2-0 win on April 11. Between his first and second long ball, a two-run shot off Aaron Loup on April 16 that proved the difference in a 4-2 Rays win, he had been robbed of another homer by a tremendous catch made at his expense by defensive wizard Kevin Pillar of the Toronto Blue Jays on the 15th; Pillar grabbed the ball as it was already past the 10-foot-high outfield fence at the Rogers Centre. Tim was optioned back to AAA on May 22 after hitting .224 with 5 homers and 16 RBI in 33 games, but he came back up later and finished the season with a .222 average in 82 games, 9 homers and 38 RBI while playing second base and shortstop.

In 2016, Beckham started the season with Tampa Bay, but only saw limited action during the first three months, even going back to Durham for a week at the end of May. At the end of June, his average was still only .179 and he had driven in a mere 7 runs in 32 games. He finally managed to show some life after the All-Star break. From July 18-21, he had a streak of eight consecutive hits, including a 5-for-5 game against the Colorado Rockies on July 20. He followed that with a solo homer off Sonny Gray of the Oakland Athletics in the second inning the next day, then had a couple more hits before being finally stopped. He had also drawn a walk during the string, raising his average from .170 to .223. He finished the season at .247 in 64 games. In 2017, he finally had a chance to play regularly and hit .259 with 12 homers in 87 games. On July 31, the Rays sent him to the Baltimore Orioles in return for minor leaguer Tobias Myers. He had a great first month for the Orioles, as he hit .394 with 6 homers and 19 RBI in 29 games in August, tallying a remarkable 50 hits during the month. He could not sustain that pace, as he hit just .180 in September, but still finished the year with his best overall numbers: a .278 average in 137 games, 22 homers, 62 RBI and 67 runs scored.

In 2018, the Orioles switched Beckham and Manny Machado, with Machado playing shortstop and Beckham third base. Tim's hitting was not as strong as the previous year, as his average fell to .230, with 12 homers and 35 RBI in 96 games. He regained the shortstop job after Machado was traded for a package of prospects in mid-year, but his performance was one of many disappointments on an Oriole team that set a franchise record for losses in a season. He became a free agent after the season and, on January 10, 2019, signed with the Seattle Mariners, who had just gone through a fire sale, leaving a number of holes in the lineup including shortstop. He stepped into the breach and got off to a tremendous start as in his first three games - all wins - he went 7 for 12 with a double, 3 homers, 6 runs and 5 RBI. He cooled off after that and his season ended early when, on August 6, he was handed an 80 game suspension after testing positive for Stanozolol, a performance-enhancing drug. He was hitting .237 with 15 homers and 47 RBI in 88 games at the time. He had lost his starting job and been relegated to the role of utility player by the time he was suspended.