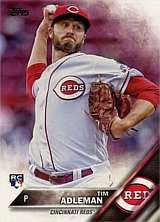 Pitcher Tim Adleman made 43 appearances for the Cincinnati Reds over two seasons.

After going 2-0 with a 4.24 ERA for the Louisville Bats in his first stint at Triple A in 2016, he earned a promotion to the big leagues. Starting against the Pittsburgh Pirates in his first appearance on May 1st, Adleman allowed two runs on three hits and two walks, striking out six, to finish with a no-decision. He earned his first win in his next start, against the Milwaukee Brewers on May 6th. In two seasons with the Reds, Tim made 43 appearances (33 starts) with a 9-15, 4.97 line and 108 strikeouts in 122 1/3 innings. He pitched with the Samsung Lions of the KBO in 2018, going 5-5 with a 4.95 ERA. Tim returned to the States for 2019, spending the majority of the year with the Toledo Mud Hens of the Detroit Tigers chain.