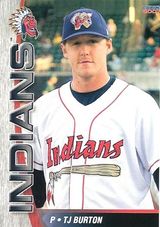 T.J. Burton pitched his 6th minor league season in 2007. He has played for Team Canada at times.

Burton was a member of the Canadian Junior National Team in 2001.

Burton spent 2006 with the Kinston Indians, going 2-5 with 19 saves and a 5.36 ERA. Opponents hit .318, including .365 by left-handed batters. He still finished second in the Carolina League in saves. In the 2006 COPABE Olympic Qualifiers, he allowed 3 hits, 3 walks and 3 runs in two innings yet notched one save for Canada.

In the 2008 Final Olympic Qualification Tournament, he allowed two runs (both unearned) in two innings. He finished up the 15-10 win over Mexico. Against the South Korean national team, he had trouble protecting a 4-1, 9th inning lead. Dae-ho Lee and Taek-keun Lee got on base and a grounder scored Lee. Joo-chan Kim singled in Taek-keun Lee before Mike Kusiewicz entered to save the game for Canada.

Burton struck out 5 in 3 2/3 scoreless innings over 5 games in the 2008 Olympics but allowed 7 baserunners. He also played for Canada in the 2009 World Baseball Classic.