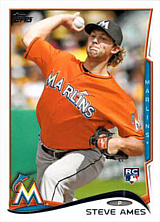 Steve Ames made his major league debut in 2013.

He was 4-1 with 3 saves and a 1.38 ERA as a freshman in junior college, then went 6-4 with two saves and a 1.88 ERA as a sophomore to win All-Conference. Transferring to Gonzaga University, he had a 8-2, 3.91 record in 2009 and tied for the team lead in wins. He was selected by the Los Angeles Dodgers in the 17th round of the 2009 amateur draft (Hank Jones was the scout) out of Gonzaga. He was assigned to the Ogden Raptors of the Pioneer League to begin his career that same year. He went 1-1, 2.10 with 7 saves in 17 games in relief, allowing just a .192 average and fanning 47 in 30 innings. He tied for 7th in the league in saves.

Ames spent most of 2010 with the Great Lakes Loons of the Midwest League, going 0-2, 2.54 with 16 saves in 23 games, also pitching briefly with the AZL Dodgers on a rehab assignment. Opponents hit just .196 against him. Despite missing a good chunk of the year, he tied Johnny Hellweg for 7th in the Midwest League in saves. In 2011, he pitched 43 games between the Rancho Cucamonga Quakes of the California League and the Chattanooga Lookouts of the AA Southern League, going a combined 2-2, 2.06 with 14 saves. He struck out 69 and walked 13 in 48 innings. Among Dodgers farmhands, he was 4th in saves, behind Logan Bawcom, Shawn Tolleson and Josh Lindblom. He pitched for the Salt River Rafters of the Arizona Fall League. He returned to Chattanooga for the whole season in 2012 and was excellent again, pitching 54 times with a record of 3-3, 1.56 and 18 saves. He struck out 72 against only 13 walks in 63 1/3 innings. He was 5th in the SL in saves (behind Frank Batista, A.J. Ramos, Bawcom and Carter Capps) and fourth in pitching appearances (after Justin Freeman, Drew Hayes and Ramos). He was 4th in the Dodgers chain in saves and tied Scott Rice for fourth in games pitched.

In 2013, he earned a promotion to the Albuquerque Isotopes of the AAA Pacific Coast League and after 30 games, was 2-2, 3.67 with 8 saves. On July 6th, he was traded to the Miami Marlins, along with Josh Wall and Angel Sanchez, in return for Ricky Nolasco. Less than a month later and after 7 shutout innings for the New Orleans Zephyrs, he was called up when Kevin Slowey went on the DL. On July 30th, he made his debut for the Marlins against the New York Mets. He came in with two outs in the 7th to replace Dan Jennings with a runner on first; he retired the only man he faced, David Wright, on a fly ball to center and was replaced by Chad Qualls to start the 9th inning. In four big league appearances, he posted a 4.50 ERA with four strikeouts. Ames was outrighted to the minors in 2014, splitting time between three Marlin affiliates, and was released on the eve of the 2015 season. He finished his career with the Bridgeport Bluefish of the Atlantic League.