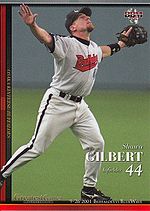 Albert Shawn Gilbert Jr. was drafted four times by three different teams - the Los Angeles Dodgers, the Cincinnati Reds and the Minnesota Twins. It wasn't until their second try that the Twins were able to finally sign him in 1987.

Gilbert, who batted and threw right-handed, made his major league debut with the New York Mets on June 2, 1997, by which time he was already 32 years old. Over the next few years, he bounced between the majors and minors. On June 10, 1998, Gilbert was traded from the Mets to the St. Louis Cardinals for Wayne Kirby. He ended up swiping only 2 bases in 51 total major league games and hitting .149.

An interesting fact about Gilbert's major league career is in 51 games, he only had 47 at-bats and he scored more runs than he had hits. It is very rare for a player to appear in 50 or more career games with more runs than hits and with more games than at-bats. Two other examples of this are Charles Gipson and Glen Barker.

In the 1999 Pan American Games, Gilbert was 3 for 8 with a double as the backup shortstop to Travis Dawkins for Team USA.