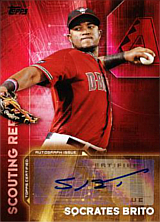 Socrates Brito is an outfielder who made his big league debut at the end of the 2015 season. He is the only big leaguer in history to bear the first name of the Greek philosopher.

He made his major league debut with the Diamondbacks late in the 2015 season, hitting .303 in 18 games. He got more playing time in 2016, getting into 40 games, but hit just .179, although he hit his first four major league homers. After spending all of 2017 in the minors, he came back to Arizona in May 2018, replacing the injured Steven Souza on the roster. He hit just .175 in 24 games. At the end of spring training 2019, he was designated for assignment, a move which ironically came one day before Souza was injured again, this time with a season-ending injury. It was too late to reverse the move, and on March 27th, he was claimed by the San Diego Padres. Before he made any appearances, he was traded to the Toronto Blue Jays on April 2nd for minor leaguer Rodrigo Orozco Jr. He was, in effect, replacing center fielder and defensive whiz Kevin Pillar on the roster, who had been traded by the Jays to the San Francisco Giants the same day. Brirto had a rough debut, as he broke David Dellucci's mark for most hitless at-bats by a player starting off with the Jays; Dellucci's mark was 20, but by the end of his 8th game on April 16th, Socrates had gone 0 for 21. He had drawn a pair of walks, but had also looked quite overmatched with 10 strikeouts, showing a complete inability to hit breaking pitches. He ultimately batted .077 before doing the DFA dance once more. When he went unclaimed, he spent the season in Triple A Buffalo, batting .282/.328/.510 with 16 homers en route to being named team MVP. Upon becoming a minor league free agent, he signed a minors pact with the Pittsburgh Pirates for 2020.