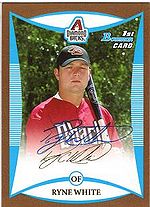 Ryne White made his professional debut in 2008.

White hit .519 with 14 homers as a high school junior, then .509 as a senior, winning All-State honors twice. Going on to college, he hit .352 in 2006, the best mark by a Purdue freshman in 42 years. He was named Freshman All-American by Collegiate Baseball. Spending the summer with the DuPage County Dragons of the Central Illinois Collegiate League, he shared MVP honors after hitting .329. In his sophomore season, Ryne batted .452/.521/.663 and led the Big Ten Conference in average, OBP, slugging and hits (90, tied with Lars Davis). White was named All-Conference at first base, but lost Player of the Year honors to Davis. White placed third in NCAA Division I in batting average.

In 2009, Ryne produced at a .266/.371/.356 rate for the Visalia Oaks. He was then traded with Scott Maine to the Chicago Cubs for Aaron Heilman. He split 2010 between the Daytona Cubs, Williamsport Crosscutters of the Philadelphia Phillies system and the independent Windy City ThunderBolts and hit a combined .252/.339/.388 with seven home runs and 45 RBI.