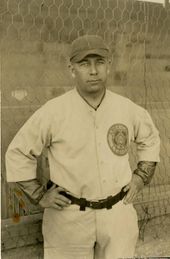 Third baseman Cliff "Runt" Marr led the Nebraska State League in 1922 with a .364 BA, 167 hits, and 116 runs while playing for the Norfolk Elk Horns, where he also took over the managing reigns in mid season.

Marr was elected to the Kansas Baseball Hall of Fame in 1953.

This page is in need of some additional content. Please help the Bullpen by expanding it, or learn how to contribute.
Retrieved from "https://www.baseball-reference.com/bpv/index.php?title=Runt_Marr&oldid=1098269"
Categories: