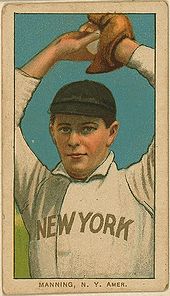 Manning was presumably nicknamed after Rube Waddell, who was six years older. Waddell was also pitching in the American League while Manning was there.

Manning won 20+ games in a season in the minors before he came to the majors, and then did it again after he left the majors. Perhaps his most impressive year, though, was in 1914 with Allentown of the Tri-State League when he was 17-2, for a team managed by John Castle.