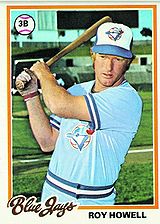 On August 5, 1975, Roy Howell became the youngest player in the history of the Texas Rangers, dating back to their days as the "new" Washington Senators, to hit a grand slam. He connected off Jim Todd of the Oakland A's in a 15-2 win in the second game of a doubleheader. He held the record until August 27, 2014, when 20-year-old Rougned Odor, a full year younger, hit one against Erasmo Ramirez of the Seattle Mariners. Howell had come up as a 20-year-old late in the 1974 season and was a regular for the Rangers in both 1975 and 1976, hitting .251 and .253 as the team's starting third baseman. He was traded to the expansion Toronto Blue Jays on May 9, 1977, in return for veterans Steve Hargan and Jim Mason, and had an excellent season for the Blue Jays, hitting .316 with 10 homers in 96 games while displacing veteran Doug Rader off third base. On September 10th, he had 2 doubles and 2 homers and drove in 9 runs in a 19-3 win over the New York Yankees; the 9 RBI set a Blue Jays team record that was not matched until Edwin Encarnacion collected 9 RBI in a three-homer game on August 29, 2015. In 1978, he was the Jays' sole representative at the All-Star Game, when he hit .270 with 61 RBI in 140 games. Due to his lack of power and middling number of walks, he was actually a below-average offensive player that season, with an OPS+ of 96.

Howell continued as the Blue Jays' starter at third base for the next two seasons, 1979 and 1980, playing well over 100 games both years, but he lost his tag of future superstar when he hit only .247 in 1979, making it clear to all that he had offensive shortcomings. He did bounce back in 1980, as his OPS+ reached 100 again on the strength of a batting line of .269/.335/.413. The Blue Jays were perennial doormats during those first four seasons; when he became a free agent after the 1980 season, Howell decided to move to a contender, the Milwaukee Brewers, even though it meant he would no longer be a starter. He shared the third base job with Sal Bando in 1981, then became a part-time DH and pinch-hitter starting in 1982. While his playing time went down, he made the postseason his first two seasons in Milwaukee, going 2 for 5 with a pair of walks as the Brewers were defeated by the New York Yankees in the Division Series in 1981, and then getting to play in the 1982 World Series, which the Brewers lost in seven games to the St. Louis Cardinals. He was hitless in the 1982 postseason, going 0 for 3 in the ALCS against the California Angels and 0 for 11 in the World Series.

Roy played two more seasons with the Brewers, in 1983 and 1984, but saw his playing time go down some more as the Brewers fell in the standings. After hitting .232 in 68 games in 1984, he was released. He signed with the San Francisco Giants for 1985 but was cut halfway through spring training. He played that season with the Portland Beavers, AAA affiliate of the Philadelphia Phillies, but did not return to the majors and retired at the end of the season.

In 1989, Roy Howell played for the St. Petersburg Pelicans of the Senior Professional Baseball Association. He hit .320 and drove in 36 runs for the club. He was prominently featured in Peter Golenbock's The Forever Boys, a chronicle of that lone full SPBA season through the eyes of the Pelicans squad.

Howell returned to baseball in 1999 as head coach of the San Luis Obispo Blues, a collegiate summer team. He spent the next several years in the San Diego Padres minor league system as a coach and manager. He was the hitting coach for the 2000 Mobile BayBears and the 2001-2002 Portland Beavers. Howell became a manager for the first time in 2003 with the Eugene Emeralds, a position he held through 2005. Howell was out of baseball in 2006.

His next baseball venture was in the dual capacity of part owner and manager of another collegiate summer team, the San Luis Obispo Rattlers. Howell managed the Rattlers from 2007-2010. In 2011, he moved back to professional ball as the manager of the Road Warriors, a road team in the Atlantic League. Howell took this position with the hope that it could lead him back into organized baseball.

In 2012, the Seattle Mariners hired Howell to serve as the hitting coach for the High Desert Mavericks. He was named California League Coach of the Year his first season and returned to the Mavericks in 2013. In 2014, he was appointed manager of the Tacoma Rainiers. Howell began the 2015 season as the hitting coach for the Jackson (TN) Generals, but took over as manager on July 1 when manager Jim Horner left for a collegiate coaching position. Howell returned to the Generals in 2016 as hitting coach. He has remained a hitting coach since then with the Arkansas Travelers in 2017-2018, and the Rainiers in 2019. He was scheduled to return to Tacoma in 2020 before the season was cancelled due to COVID-19. In 2021 Howell is once again the Tacoma hitting coach.