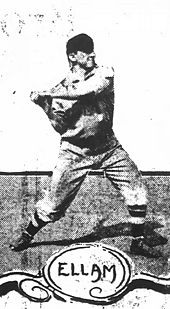 Ellam was enough of a defensive star that he got his first chance at the majors although he had hit only .196 in the minors in 1909. His hitting in the minors largely improved over the years (he hit .294 in 1917 for Nashville) and when play was suspended in the Southern Association in 1918 due to the war, he came to the majors for one more stint.

He holds some career defensive records at shortstop in the Southern Association, where he played nearly 1,400 games.

He worked in a plumbing and heating business after baseball.