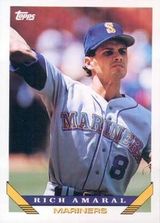 Per a 2018 article on Baseball Prospectus, researcher Ted Turocy determined that a performance by Amaral is the closest match to the events narrated by Hall of Famer Phil Rizzuto in Meat Loaf's "Paradise By The Dashboard Light". In a game played June 18, 1995, Amaral smoked a one out double off Kevin Tapani of the Minnesota Twins in the bottom of the 9th, stole third base, and scored the game winning run on a Chad Kreuter sacrifice bunt.

Amaral's son, Beau Amaral, was drafted in 2009 but went on to college and played for UCLA in the 2010 College World Series. Beau and another son, Danny, played pro ball. For his part, Rich became a scout with the Kansas City Royals. He signed Nick Pratto.