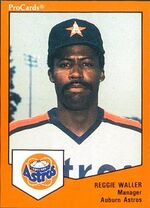 Waller wound up in the Houston Astros organization in 1979, splitting the season between the Daytona Beach Astros and Columbus Astros. He hit a combined .292 in 125 games that year. He played his final minor league season in 1980, hitting .250 in 120 games for the Columbus Astros.

Overall, Waller hit .262 in 680 minor league games, over the course of a six-year career.

Waller managed the Auburn Astros in 1989, leading them to a 35-42 record. Future major leaguers Kenny Lofton, Todd Jones, Shane Reynolds, Mark Small and Donne Wall played for him that season.

He also scouted for the Houston Astros and New York Yankees. In 1991, he was as special assistant to the general manager of the Seattle Mariners. He served as the scouting director for the San Diego Padres in 1992 and 1993, and in 1994 he was an assistant general manager for the Padres.

He was the first minority executive in San Diego Padres history.

Below is an incomplete list of players Waller has signed as a scout.