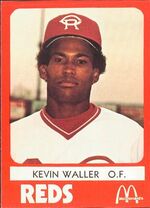 Following his professional career, he worked at the San Diego School of Baseball for 23 years. He was an assistant hitting coach for Western Illinois University in 2007.