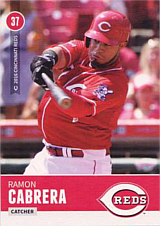 Ramón made his big league debut not with Detroit or Pittsburgh but the Cincinnati Reds, whose organization he joined as a minor league free agent prior to 2015. He was a September call up in his first year, seeing action in 13 games, and spent a fair amount of time with the club in 2016 as a backup. In 74 games, he hit .264/.291/.378 with 4 home runs. The Reds cut him loose after the latter season. He spent a season in the Miami Marlins organization before moving to the Long Island Ducks of the Atlantic League for two seasons.

Some sources give his place of birth as Cumana, Sucre, and not Caracas.