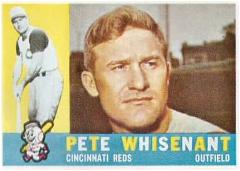 Pete Whisenant played eight seasons in the majors. Primarily a back-up outfielder, he only once had over 300 at-bats in a season (with the Chicago Cubs in 1956, and one other time had over 200 at-bats (with the Cincinnati Redlegs in 1958).

Whisenant was born in Asheville, NC and signed as an amateur free agent with the Boston Braves when he was 17 years old. He played eight seasons in the Braves' minor league organization as an outfielder, hitting 101 minor league home runs. Whisenant missed the 1951 season due to military service.

He first came to the majors with the Braves in 1952, in the last year that the Braves were in Boston, MA. At age 22, he was one of the youngest players on the team, two years older than teammate Eddie Mathews.

In mid-1955, he was traded to the St. Louis Cardinals, and appeared in 58 games for them during the remainder of the season. At age 25, he was the same age as fellow outfielder Wally Moon. The Cards then traded him before the 1956 season to the Cubs, for whom he became the starting centerfielder. He was a year older than teammate Ernie Banks. He hit .239 with 11 homers and 46 RBIs.

After the season, the Cubs traded him to the Redlegs, for whom he would play from 1957 to 1959 and one game in 1960. He was a year younger than fellow outfielder Gus Bell and six years older than teammate Frank Robinson.

In 1960 the Reds sold him early in the season to the Cleveland Indians, who then traded him a couple of weeks later to the Washington Senators. He appeared in 58 games with the Senators, and was six years older than teammate Harmon Killebrew. After that season, the Senators relocated to become the Minnesota Twins.

He closed out his playing career with two teams in 1961, the Twins and back with the Reds, as they were once again known. The Reds released him as a player in August and so he was no longer on the active roster when the team played in the 1961 World Series. However, he was a member of the team's coaching staff in 1961 and 1962.

As a manager, Whisenant led the Modesto A's to the California League championship in 1982. He also managed the Albany A's in the Eastern League in 1983 until being fired in July [1].

His obituary in the Sarasota Herald-Tribune indicated that he was a top high school ballplayer who appeared in a national all-star game where his coach was Honus Wagner. After baseball, he and Tommy Helms ran a vending machine business in North Carolina. Pete later ran the business in Indiana and then in Florida. He also had several other businesses in Florida, which the obituary said were successful. He was involved in politics as part of the Charlotte County Development Authority and he ran unsuccessfully for a place on the County Commission.