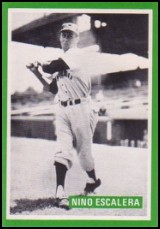 Free agent lefthanded-hitting first baseman/outfielder Nino Escalera , from Santurce, Puerto Rico, hit .347 in 62 games for the Bristol Owls of the Colonial League in 1949, then came right back in 1950 to hit .389 in 67 contests for the same Bristol club. He was acquired by the New York Yankees in July of that year.

The 20-year-old was sent to the Amsterdam Rugmakers by the Yankees where he finished out the season by appearing in 52 games, splitting his playing time between first base and the outfield and hitting at a .337 clip. Nino was proving himself to be a consistent .300-plus hitter in the minor leagues including a .374 mark for the 1951 Muskegon Reds of the class A Central League, finishing only .005 behind his teammate Jim Greengrass, for the league's batting title, plus making the All-Star Team.

Playing like he did, Escalera was purchased by the Cincinnati Reds from the AAA Toledo Mud Hens / Charleston Senators club of the American Association on July 6, 1952 and was assigned to the AA Tulsa Oilers of the Texas League.

After hitting .305 for Tulsa in 1953, he had his one chance to face major league pitching with the Redlegs in 1954. But the 165-pounder failed to hit his weight with just a .159 average in 73 games. Nino then spent the next 8 years (1955-1962) in the International League with the Havana Sugar Kings, Columbus Jets and finished out his 14-year pro baseball career in 1962 with the Rochester Red Wings. Nino was 36 years old when he retired.

Escalera was the first black player in Cincinnati Reds history, although many official sources list Chuck Harmon, an African-American instead of the dark-skinned Latino Escalera. Escalera is possibly the last left-handed shortstop in National League history.

Escalera continued to play for several more years in Puerto Rico, where he made his home in Rio Piedras. He remained in the game as a scout for the San Francisco Giants and most recently the New York Mets. He signed Benny Ayala, Ed Figueroa, Juan Guerrero and Alex Treviño and also recommended Francisco Estrada to the Mets.