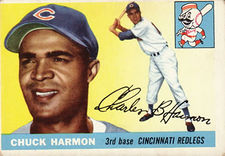 When Chuck Harmon made his major league debut in 1954, he was the first African-American player on the Cincinnati Redlegs. Some sources also list him as the first black Reds player, though the Puerto-Rican-born Nino Escalera preceded him by a year. After his playing career, he was a part-time scout for the Cleveland Indians and Atlanta Braves.

Harmon is the only major league player from Washington, Indiana through 2007. He was inducted into the Indiana Baseball Hall of Fame in 1995. In 2015, he was honored when a statue in his likeness was unveiled in front of Major League Baseball's Urban Youth Academy complex in Cincinnati, OH, as part of the 2015 All-Star Game festivities. Aged 91, Harmon was still able to attend the ceremony.