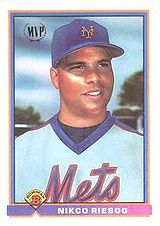 Outfielder Nikco Riesgo was selected by the San Diego Padres in the 8th Round of the 1988 amateur draft. Prior to the 1990 season he was traded to the New York Mets. That season, while playing for the St. Lucie Mets, he was named the the Florida State League MVP. He led the league with 219 total bases, 35 doubles, and 94 RBI. He also had 46 stolen bases and his 14 home runs were second to Ray Giannelli's 18. He was traded to the Philadelphia Phillies on August 30th in the deal that sent Tom Herr to the Mets.

After the 1990 season, the Phillies failed to place Riesgo on their major league roster and he was selected by the Montreal Expos in the 1990 Rule V Draft. After spending the first two weeks of the 1991 season on the disabled list, he made his major league debut on April 26th against the New York Mets at Stade Olympique. He got his sole major league hit that day, off Frank Viola, but was thrown out trying to stretch it into a double. The Expos offered him back to the Phillies a few days later, as they were not prepared to keep him on their roster the entire season, and he spent the remainder of the year with the Reading Phillies of the Eastern League, hitting .258 in 98 games. He never made it back to the majors. He tried to find a job as a strike replacement player before the 1995 season but was unsuccessful in cracking a major league roster. He did publish a book about his experience, however.