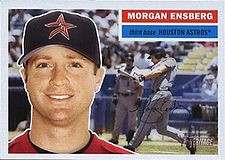 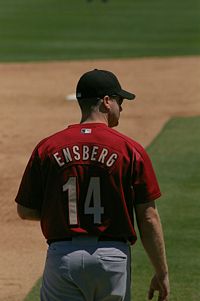 Morgan Ensberg and Jason Lane were teammates on four different teams. They were together at USC and Ensberg was drafted by the Houston Astros in 1998 and was followed to Houston by Lane a year later. In July of 2007 the Astros traded Ensberg to the San Diego Padres for a player to be named later. Just weeks later Lane was sent to the Padres in a separate deal. Finally that off-season both players signed with the New York Yankees as free agents. However, Ensberg was released after a few weeks of ineffective play in 2008, when he hit .203 in 28 games while Lane never even made the team. Ensberg signed with the Tampa Bay Rays for 2009 but was released at the end of spring training which effectively ended his playing career.

Ensberg returned to USC in 2010 to finish his finance degree and worked with the baseball team as an undergraduate assistant coach in 2011. He then moved to the University of California, San Diego for 2012 as an assistant coach.

He became an infield "development specialist" for the Houston Astros in 2013, assigned to the Lancaster JetHawks. In 2014, he was a special assignment coach with the Astros and retained this role in 2015. In 2016, the Astros named him "minor league mindset coach", a position specifically created for him, that blends his passion for analytics with sports psychology, to help players in the system understand the organizational philosophy and their part in it as they move through the system. He then became a manager with the Tri-City ValleyCats in 2017 and Buies Creek Astros in 2018

Ensberg moved to the Rays' organization in 2019 and has managed AA Montgomery Biscuits since then. He was scheduled to manage the Biscuits again in 2020 before the season was cancelled due to COVID-19.

Ensberg has been announcing the Fullerton Regional for ESPN in 2011.