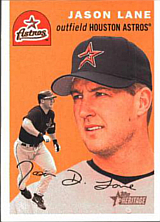 Jason Lane also pitched in college. He picked up the pitcher win in the infamous 1998 "slugfest" game in which USC beat Arizona State 21-14 for the College World Series title. Lane also hit a grand slam in that game.

He played in the major leagues from 2002 to 2007, logging 497 games as an outfielder. All of these were with the Houston Astros, except for 3 games with the San Diego Padres late in 2007.

In 2014, he returned to the major leagues at 37 as a relief pitcher for the Padres, his first big league time in seven yars. While he had pitched intermittently in the minors starting in 2009, he only made the switch full time after the 2011 season, and it required spending large chunks of the 2012 and 2013 seasons outside of organized baseball with the Sugar Land Skeeters of the Atlantic League. He was mainly a starter in the minors and was 5-4, 4.36 in 11 starts for the El Paso Chihuahuas when the Padres gave him a call to help out a depleted bullpen. In his pitching debut June 3rd, he retired all 10 batters he faced in a game against the Pittsburgh Pirates after relieving Jesse Hahn, who was making his major league debut, with two outs in the 4th and the Padres trailing, 4-0. His strong performance kept San Diego in the game, but they still lost, 4-1. He made his first major league start on July 28th, being called up from El Paso to take the place of Ian Kennedy and managed to keep the Atlanta Braves off the scoreboard for 6 innings before Evan Gattis led off the 7th with a homer; unfortunately, his opponent, Ervin Santana, kept the Padres from scoring at all, and Jason was charged with the loss. He was one of the ten oldest pitchers to ever make his first major league start, and the oldest since Troy Percival in 2007; the difference was that Percival had over 10 years of experience as a big league reliever at that point. In all, he was 0-1, 0.87 in 3 major league pitching appearances while going 9-9, 4.52 for El Paso. He could still hit a bit too, as he hit .362 and slugged .580 in AAA, and went 1 for 3 in the bigs.

In 2014, Lane made an unwitting appearance in the Academy Awards-nominated film Boyhood; at one point, actor Ethan Hawke takes his son to see an Astros game, and the film shows Jason hitting a home run. The film, famously, was shot in real time over 12 years, so the homer was actually hit in a game against the Milwaukee Brewers back on April 17, 2007. The camera happened to be rolling when he hit his long ball in the 7th and the footage was kept.

Lane finished his playing career with a final season as a pitcher with El Paso in 2015, when he was 10-10, 5.71 in 28 starts and 164 innings. He retired as a player after the season and in 2016, he joined the Milwaukee Brewers as their assistant hitting coach. He was still in pretty good shape, though, as in the team's last exhibition game of the spring, against the AA Biloxi Shuckers, he hit a pinch-hit homer in the 8th inning. In 2020 he took over as the team's first base coach, then moved to the third base coaching job in 2021.