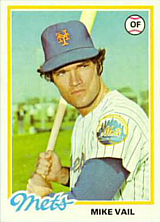 "I just got tired of being around him [Mike Vail]. There isn't enough money in the world to pay me to manage if I have to look at that face every day." - Herman Franks, Cubs manager, after announcing his resignation prior to the conclusion of the 1979 season.

Outfielder Mike Vail began his career as a highly touted prospect but was never more than a platoon player during a decade in the majors.

Originally drafted by the Los Angeles Dodgers in the 1970 amateur draft, Vail did not sign, attending De Anza College instead. He was then selected by the St. Louis Cardinals in the January 1971 amateur draft and began his pro career that summer. After four years in the Cardinals' chain, he was dealt to the New York Mets.

Vail had a huge season with the Tidewater Tides in 1975, leading the International League with a .342 average and 9 triples while being named the circuit's MVP. He made his big league debut with the Mets in August, and from August 22nd to September 15th, he recorded a hit in 23 straight games to tie a rookie record. On a down note, he also struck out 7 times during a September 26th doubleheader. Overall, he hit .302 in 38 games with the big club. Prior to the 1976 campaign, the Mets dealt Rusty Staub to make room for Vail, dubbed the "player of the future". Vail promptly dislocated his left foot playing basketball and did not appear until mid-June. He struggled at the plate that summer, hitting just .217 in 53 games. Splitting time in right field with Bruce Boisclair in 1977, he hit .262 with 8 home runs.

Claimed off waivers by the Cleveland Indians prior to the 1978 season, Vail split time between the big league team and the Triple a Portland Beavers before being dealt to the Chicago Cubs in June. After the 1980 season, he was traded to the Cincinnati Reds for Hector Cruz. Following two years with the Reds, he played briefly with the San Francisco Giants, Montreal Expos, and Los Angeles Dodgers before retiring in 1984.

In 1989, Vail played for the Orlando Juice of the Senior Professional Baseball Association. In 2 games, he batted .500.

As a minor leaguer with the Cardinals, Vail roomed with a youngster named Randy Poffo. Poffo achieved far greater fame in the world of professional wrestling, becoming the legendary "Macho Man" Randy Savage.