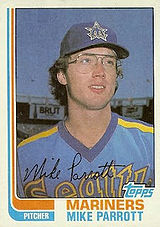 Mike Parrott played professionally for 14 seasons, including parts of 5 in the major leagues, before beginning a lengthy coaching career. "Bird" was a first round pick of the Baltimore Orioles in the 1973 amateur draft after a stellar prep career at Camarillo High School in California. Parrott made his major league debut in 1977 with the Orioles and spent another four years with the Seattle Mariners from 1978 to 1981 after being acquired for Carlos Lopez and Tommy Moore. He compiled a 19-39 record and a 4.87 ERA in 119 career games. 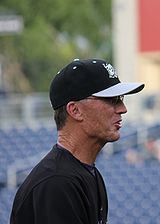 Mike's best season was in 1979 when he went 14-12 with a 3.77 ERA including 13 complete games, tenth best in the American League. At the time he set all-time Mariner records in wins, ERA, and innings pitched (229 1/3). He got off to an auspicious start in 1980 by winning the Mariners' season opener, but that would prove to be his only victory of the season, after which he lost his last 16 decisions. His next win wouldn't come until May 6, 1981. His 18 consecutive losses over that span fell 1 shy of the American League record.