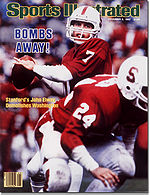 Mike Dotterer is the son of Dutch Dotterer, grandson of Henry John "Dutch" Dotterer, Sr. and nephew of Tom Dotterer. In his career at Stanford University (1979-1983) he was a .340 hitter, including a high of .386 in 1981 with a record 108 hits. Mike also played football and baseball with John Elway at Stanford (see him blocking for John on the cover of Sports Illustrated). He won Gold with Team USA in the 1981 World Games. He helped the Cardinal to three NCAA Regionals appearances and two trips to the College World Series (1982 and 1983). Mike was inducted to the Stanford Hall of Fame in 2006 as the only athlete in Stanford history to letter in both baseball and football for four years. Dotterer was drafted by the New York Yankees in 1979 and 1983 and by the Oakland Athletics in 1982, but did not sign a professional baseball contract. He was also selected in the 8th round of the 1983 NFL Draft by the Los Angeles Raiders and did sign a professional football contract, although he never appeared in a regular season game.