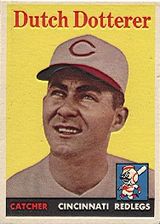 Dutch Dotterer was the son of Henry John "Dutch" Dotterer, Sr. and brother of Tom Dotterer, both minor leaguers.

In October of 1960, the Reds traded Dotterer to the Kansas City Athletics for Danny Kravitz. In December 1960, he was selected by the Washington Senators in the expansion draft and played briefly for the Senators in 1961.

His son, Mike Dotterer, was drafted by major league clubs in three different years and by the NFL's Los Angeles Raiders.