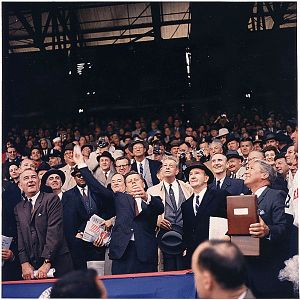 JFK throws out the first pitch at the Senators' Opening Day

The 1961 Washington Senators were an expansion team, even though a team sporting the same name had played in the same city in 1960. That team, the "old" Washington Senators had since moved and become the Minnesota Twins. In their place were the "new" Senators, created in only a few months when the American League decided to beat the National League to the punch by adding two teams one season before the senior circuit did so.

However, apart from sharing a name and a ballpark, there was not much else in common between the two versions of the team. The cast of players was entirely different, largely composed of cast-offs from other American League teams made available through the expansion draft. The ownership was different as well; and while manager Mickey Vernon had spent many years as a member of the old Senators, it was solely as a player. He had just retired at the end of the previous season and his first professional managerial assignment did not come under the easiest of circumstances. The biggest losers in the affair were Washington's baseball fans: after decades of irrelevance, the old Senators had begun to show signs of life in their last two seasons before leaving the capital, bringing up a host of talented young players such as Harmon Killebrew, Bob Allison and Jim Kaat. Their development into a winning team would come in Minnesota though. In Washington, it was back to square one, as a farm system had to be built from scratch, and the team would dwell in or near the cellar for the foreseeable future.

The Senators finished tied for last place with the Kansas City Athletics, well behind their expansion brothers the Los Angeles Angels. The team was noticeably short of talent, and many of its better players were long in the tooth: resurrected veteran Dick Donovan, already 33, was its sole All-Star and its best pitcher at 10-10, 2.40. C Gene Green led the team with 18 home runs, one ahead of 35-year-old 1B Dale Long and CF Willie Tasby. The top hitter was outfielder Gene Woodling, now 38, at .313. There were a couple of promising younger players on the team, rookie OF Chuck Hinton, who hit .260, and P Bennie Daniels (12-11, 3.44). They at least would be able to contribute for a few years. Further down the pipeline, a 21-year-old Claude Osteen and a 19-year-old Ed Brinkman played a few games each; they both would go on to long and successful major league careers. Washington was glad to still have a team, but it was faced with many more years of losing.