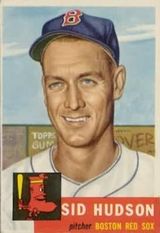 Sid Hudson had a 12-year career as a pitcher, and then was a scout for the Boston Red Sox (1955-1960), and a longtime coach with the Washington Senators and remained with the club when they became the Texas Rangers. He then returned to scouting for the Rangers from 1973 into the 1980s. From 1987 to 1993, Hudson was an assistant coach at Baylor University.

He got his chance in 1940 with the Washington Senators after a tremendous year in 1939 with the Sanford Lookouts of the Florida State League. Hudson not only had a record of 24-4 with an ERA of 1.79, but he also had the highest batting average on the team, hitting .338. Even though Hudson won the pitching triple crown in 1939 (192 K also), he was not one of the two pitchers named to the league All-Star team.

Hudson had a thankless task, pitching for the Washington Senators at a time when they weren't very good. He then finished up his career with the Boston Red Sox, and the only time in his career when his team won 80+ games in a season was in 1953 when the Red Sox won 84.

Hudson enlisted in the Army in October 1942 and was discharged in January 1946.