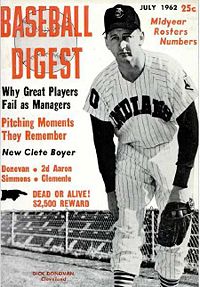 "(Dick Donovan) was tough as nails. He took no prisoners." - Jim Derrington in an L.A. Times interview in 1991

Pitcher Dick Donovan overcame a slow start to his big league career to become a three-time All-Star and a twenty-game winner.

Donovan made 27 big league appearances without a win for the over the course of four seasons for the Boston Braves and Detroit Tigers from 1950 to 1954. After winning 18 games for the Atlanta Crackers in 1954, his contract was purchased by the Chicago White Sox, and he began a five-year run as a member of the Chicago rotation in 1955. In his first campaign with the Sox, he won 15 games and earned a trip to the All-Star Game before his season was cut short by an emergency appendectomy.

Donovan had his finest year with the White Sox in 1957, going 16-6 with a 2.77 ERA and a pair of one-hitters while leading the American League with a .727 winning percentage and 16 complete games. After winning 15 games again the next summer, he was slowed by a sore shoulder in 1959 but went on to make 3 appearances in the World Series that year, earning a save in Game 5.

Donovan pitched primarily out of the bullpen in 1960 and was selected by the Washington Senators in the 1960 expansion draft. Despite going just 10-10 with the first-year club, he made the All-Star Team again and topped the AL with a 2.40 ERA in 1961. After one summer in the nation's capital, he was traded to the Cleveland Indians for Jimmy Piersall. In his first season with the Tribe, he won 20 games and made the All-Star Game for a third time. He also had his best year at the plate in 1962, hitting a pair of homers in a single game twice, once on May 30th and again on August 31st.

After his big league career, Donovan worked as a real estate appraiser in Massachusetts.