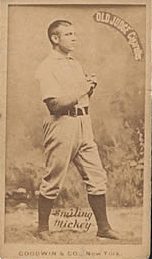 Mickey Welch (Smiling Mickey) posted 307 career wins in 13 major league seasons. He rarely led the league in major categories, but was often among the leaders in ERA, wins, or winning percentage. His best year was 1885 when he went 44-11 with a 1.66 ERA. Both totals were second in the National League. He was the third man to reach 300 wins, after Pud Galvin and Tim Keefe.

In his rookie year, Welch played for the Troy Trojans with Dan Brouthers, Roger Connor, Tim Keefe and Buck Ewing, all future Hall of Famers. Welch and Ewing were both 20 at the time. He moved to the New York Gothams - who would later become known as the New York Giants - with Ewing and Connor in 1883, when Troy disbanded, and he played the rest of his career in New York.

On August 28, 1884, he began a game by striking out the first nine batters he faced. No pitcher has matched that number since, and only three men - Jim Deshaies, Jacob deGrom and German Marquez - have since opened a game with as many as 8 consecutive strikeouts. He is given credit for pioneering the screwball - he called it a reverse curve.

He worked regularly as a fill-in umpire during his career, with a total of 7 games, all in the National League, between 1881 and 1890. He was one of the few star players who did not defect to the Players League in 1890. He was set to join his close friends Connor and Keefe with the New York Players League team managed by another friend, Buck Ewing, but owner John B. Day convinced him to stay in the National League by offering him a guaranteed three-year contract for $4,000 per year - something unheard of at the time. Welch was conscious that he was the nearing the end of his playing career and took the guaranteed money, a wise move since the Players League folded after one year, and he did start to lose his effectiveness beginning in 1891. It was young Amos Rusie, who had been brought in to cover for the defectors in 1890, who became the Giants' pitching ace.

He was reported as being the father of many children and was prosperously conducting a hotel in Holyoke, MA in 1907 per a newspaper article from that time. [1] He later moved to New York for the summers and attended many games at the Polo Grounds and Yankee Stadium. John McGraw, who liked to have old ballplayers around him, offered him a job as a night watchman at the Polo Grounds, and he later worked as a ticket seller at Yankee Stadium. He was often quoted in newspapers, and unlike many of his contemporaries, he admired some of the more modern players. For example, he praised Carl Hubbell for mastering the pitch he had invented; he also admired Ty Cobb, but had little time for sluggers like Babe Ruth. He outlived all of his teammates from the first New York Gothams team, and died while visiting his son in Concord, NH in 1941, but was buried in Brooklyn.

For some reason, he was passed over for many years after the Hall of Fame, in spite of his outstanding numbers. It took until the elections of Early Wynn and Warren Spahn in the early 1970s to bring focus on him as the only 300 game winner not in Cooperstown, as he had been completely forgotten by then. While many of the choice of players made by the Veterans Committee in the 1970s were harshly criticized, few could object about Mickey's selection, as he was clearly one of the greatest pitchers of the 19th century.